With the New Year just around the corner we thought that it would be a nice opportunity to share some recent events and introduce a new mobile app to the public. In this article you will have the chance to find out more about our new mobile PDF converter that might suit the needs of some and the wishes of many! You will also find a lovely app that just might help you convert PDF to text files with little to no hassle! 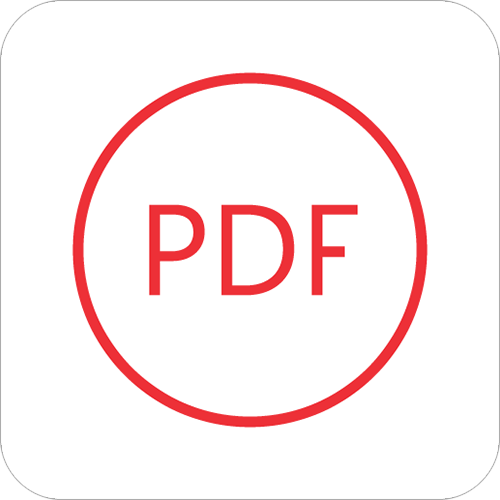 If you have been an avid follower of the Cometdocs work, by now you have surely found that our mission to help everyday tech users focuses mostly on ordinary things, such as dealing with troublesome file formats. The latest product of our efforts to create a new converter has resulted in the creation of PDF Converter Ultimate.

As we have previously said, this app is merely a product of a long-time effort by the development team and the brainstorming crew behind them. Firstly, there were many since file conversion apps such as PDF to Word that converted files from PDF to a different editable format. Also, we had to have them going both ways so we worked on apps to further manipulate formats and expanded our views, thus inadvertently creating a whole new line of apps such as Save as PDF. This was the first app that could convert more than a single file type.

PDF to Word and Save as PDF were game changing apps at the time of their release. 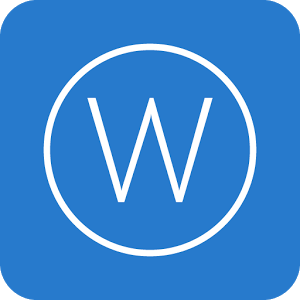 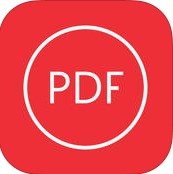 Those two apps lead the way to open a door for PDF Converter Ultimate. Playing with the features and going back and forth with in app purchases has paved the road for this new app. Not being afraid to experiment is perhaps the biggest feat humankind has achieved, and now you can also be a part of it! But for now, let’s just keep in mind those two apps as we will get a closer look to how they affected the rise of PDF Converter Ultimate.

More than a user-friendly interface

One of the more important ideas to keep in mind when making an app is that it should be as simple as possible, while doing the job it is supposed to do with utmost quality. That way you get to have an app that won’t be too confusing for older generations, while being a trusted resource once you find yourself in need of such a tool. That is why we have designed PDF Converter Ultimate to have little to no switching between screens to keep it short and sweet. Once you open the app you will be looking at the main screen, and the place where most of the action is going on at the same time. That way, you can see all the changes as well as keep track on the files you previously converted. 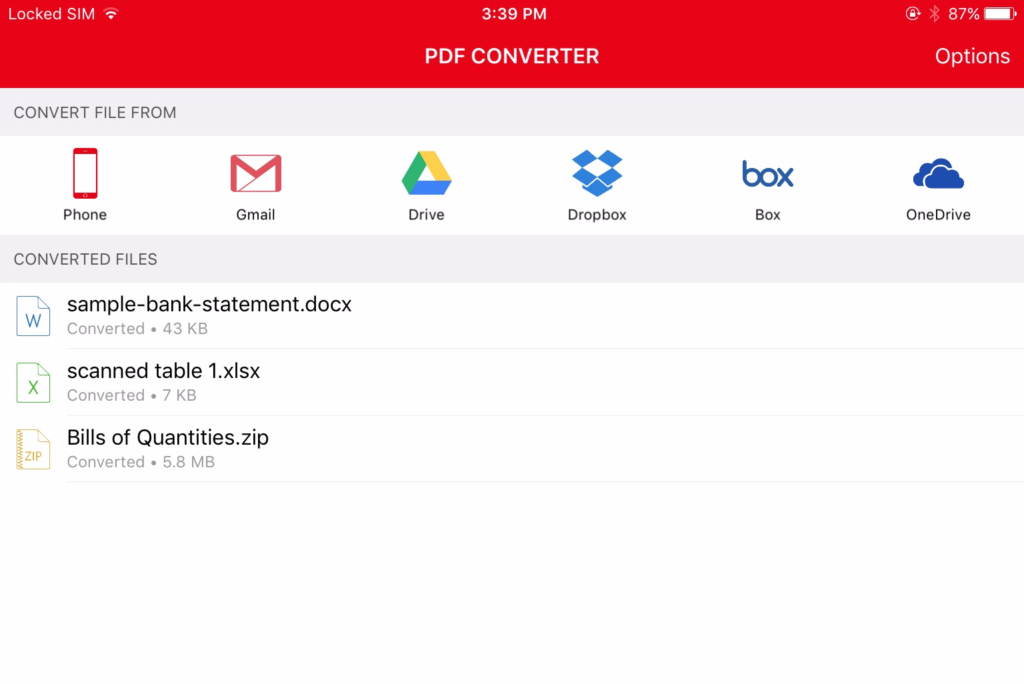 As you can see from the image above the interface closely resembles previous versions of Cometdocs apps with a few minor tweaks. The app is laid out so that you can get through the conversion as fast as possible, all the while not having to move more than a couple of fingers!

If you take a closer look at the upper part you will see that in the box marked Convert file from, there are 6 different ways to import a file to PDF Converter Ultimate. The first way is by manually selecting the file from your phone’s memory. If you tap on Phone you will see a short guide to the proper and easiest way to do so. Since iOS as a platform doesn’t have a built-in file browsing system, the app has limited ways of importing the file from the memory. However, the Android version of PDF Converter Ultimate does not have such limitations as the iOS platform due to its nature of being an open source platform. If you are an Android user, you will be glad to hear that you will be able to easily search and import all files from within the app!

State of the art PDF to Text converter

As a final freebie and last surprise, PDF Converter Ultimate introduced a free PDF to Text conversion feature. Aside from that type, you can upgrade to another 5 types of conversion: 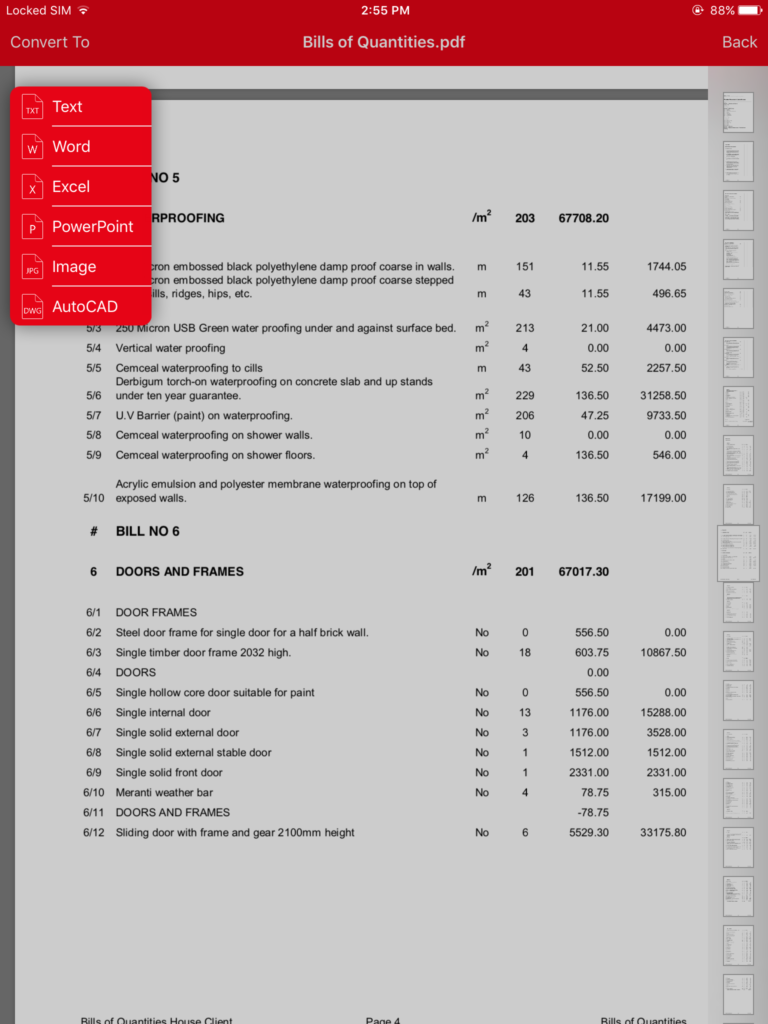 Pro tip: purchase 5 types of conversion in a bundle for a lower price!

But first a few pieces of information about the text file. Who uses this file format? What is it good for? Well a few things. Since PDFs are usually not editable files, the primary function of this type of conversion is to make the original file editable. Also, PDFs are often heavily formatted, and that is why having an app that can instantly remove the formatting of the content is a must have! Who would find this useful? Well, basically anyone who works with HTML, CSS or several other programming languages. Those professionals write most of their code in Notepad++, which is a text editor and source code editor for use with Microsoft Windows. Suggesting this app to a programmer might make him fall in love with you!

How to convert PDF to .txt

If you haven’t downloaded PDF Converter Ultimate by now, this would be a great time to do so if you want to follow this guide step by step. Since it is a cross platform mobile app, you can find it on both Google Play Store and iOS AppStore. Once you download the app it should appear on your screen. This guide will be showing the proper way to do it on a iOS device, for which any iPhone 4 or newer, or any iPad will do the trick! The interface for Android devices is a bit different, but the concept is similar!

Step 1a: Locate the file which you want to convert

If you are importing the PDF file from your device’s memory, find it on your mobile device. Tap on the share button and the app will show you a selection of apps that can open that format, one of which will be PDF Converter Ultimate. After you tap on its logo, PDF Converter Ultimate will open the file in a preview. From that window, you can give the file a look and discard it, or proceed with conversion.

Step 1b: Import file from the cloud services

Importing a file from the cloud services is much easier and we strongly recommend you take advantage of this free feature. Select the cloud service which has your file stored, and put in the login information for the selected service. You can choose from 5 different services: Gmail, Google Drive, Dropbox, OneDrive and Box. Once the app approves your profile, it will list all convertible files, with the oldest being on the bottom and newest files sitting comfortably on top of that list. Tapping on your desired file will open it in a preview window once again.

For free users, at the moment, this is the only free type of conversion offered by PDF Converter Ultimate. From the preview window tap on Convert To and then follow up with selecting Text. For users that have the full version this drop-down menu is where you select other types of conversion as well. The full version also converts Word, Excel, PowerPoint, Image, and AutoCAD files. Another important thing to note when selecting files to convert is that the iOS version can convert only one file at a time due to the nature of the iOS platform. Android on the other hand does have batch conversions available, which we urge you to test out since it is one of our latest additions to this and several other apps. Batch conversions send several files to the servers, however they still do get converted one at a time.

Step 3: Wait for .txt file to be converted and downloaded

Once you’ve selected the type of conversion, the PDF is sent to Cometdocs servers for conversion. Each file is deleted from the server 24 hours after the conversion is done. That way, the user privacy is still protected, and the servers don’t get over flooded with needless files. When the server recognises the file, it will show up on the main screen, as you can see below. 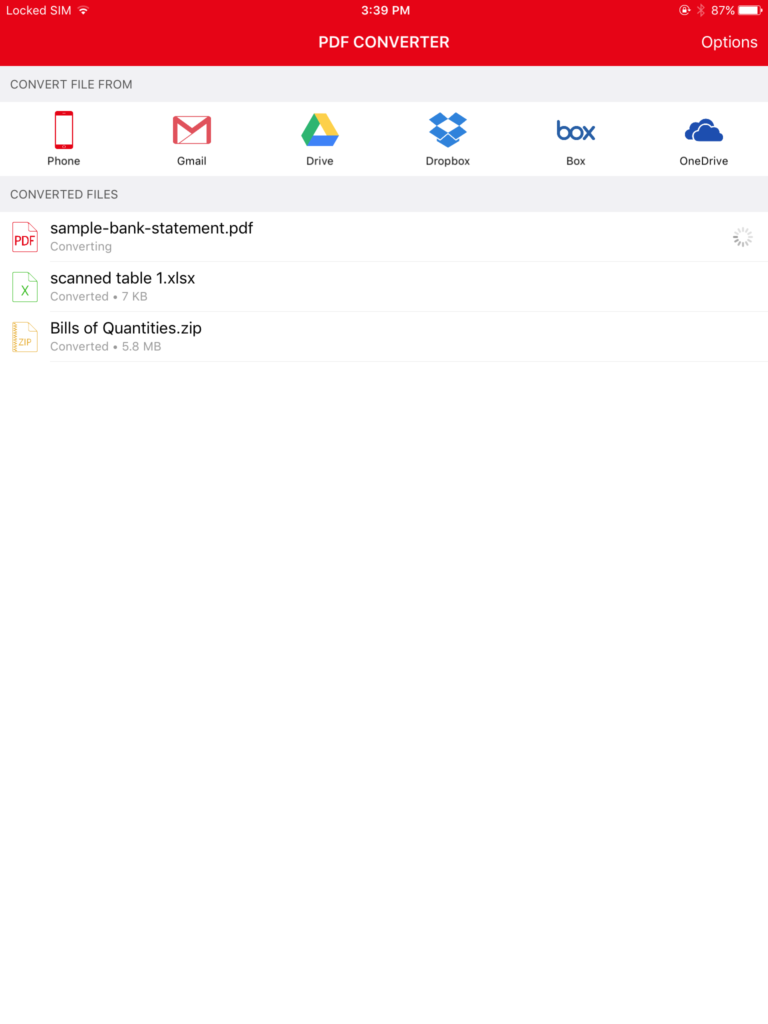 Once the file is converted it will be downloaded onto your device. It is important to note that it is of utmost importance to have internet connection at all times while using PDF Converter Ultimate. Since the whole conversion is done online having a good connection will speed up the process. All converted files appear on the main screen, with little icons to the left of their name, implying to the file format for easier recognition.

Step 5: Have fun with your new file

Now that the file is on your device you can decide if you want to send it out, edit it in the app of your choice or whatever you might have in plan for it! It is important to note that PDF Converter Ultimate doesn’t have an editing feature which is why we recommend having a text editing app if you find yourself in need of it.

What are your thoughts?

Since this article is the first detailed guide on one of our mobile apps we would love to hear your opinion, on the app itself, on this type of articles, and any other opinion you might have! Feel free to give PDF Converter Ultimate a go and convert a few files for yourself! We are more than happy to read your comments on the App Store and we appreciate every tip and piece of advice we can get from our users and fan base. By doing so you are directly contributing to the development process without having to pay a cent! We are immensely thankful for having such an impactful fan base and we would like you to have a lovely New Year and Christmas holidays!
Cheers!

Sandra Rodgers is our Community Manager here at Cometdocs, and she writes for the Cometdocs blog every now and then. She loves yoga, travel, photography, cooking foreign cuisine traditional meals and she’s a major tech enthusiast. Feel free to reach out to her on Twitter.